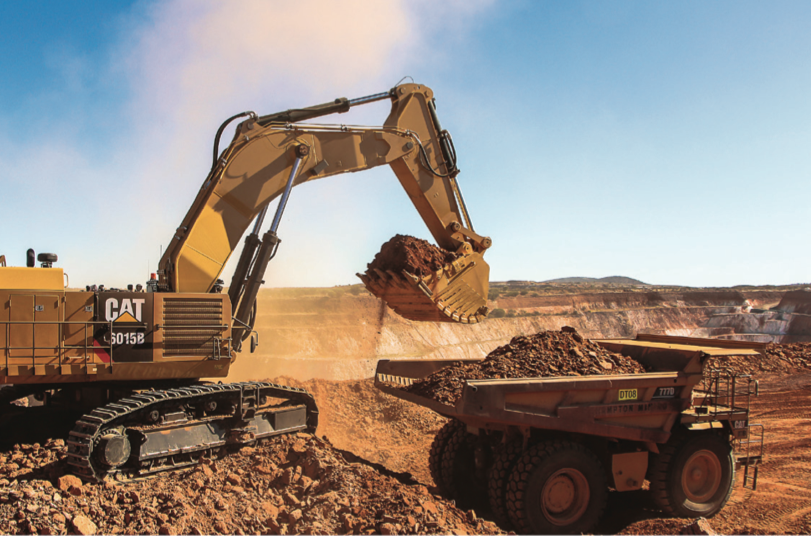 6015B outclasses its rivals under Australian conditions

Weighing in at 140 tonnes and with an 8.1 cubic metre bucket, the Cat 6015B fills a long-standing gap in the Australian hydraulic excavator market. But how does it stack up against its rivals? A new production study conducted in Western Australia’s Goldfields region shows the new Cat easily outperforms the competition for fuel economy and productivity.

Contract mining and transport is one of most competitive sectors in the Australian mining landscape. Operators are paid either by the tonne or cubic metre of dirt delivered and need to keep fuel costs low and productivity high to turn a profit.

The arrival of the Cat 6015B hydraulic shovel into the Australian market promises mining contractors a major opportunity to increase the profitability and output of their operations. With a 27-litre engine and an 8.1 cubic metre shovel, it has consistently outperformed competitors in overseas tests, delivering better productivity and fuel efficiency.

But how suited is the Cat 6015B to Australian conditions? And can it deliver the same key advantages over its rivals here?

To assess the shovel’s performance against the local competition, leading Cat dealer WesTrac cooperated with the first Australian customer for the 6015B, West Australian contract miner Hampton Civil and Mining. After six months of operation at the Fortnum mine site in Western Australia, Hampton’s 6015B shovel was put head to head in a series of tests with an Hitachi EX1200 digger also used on site.

The results of the tests were definitive. The 6015B easily outperformed its rival, loading 28 percent more dirt per hour, consuming on average nine percent less fuel, and providing a sweet spot for loading the Cat 777 off-highway trucks on site.

About the test environment

Hampton Mining and Civil is a leading mining and transport contractor operating out of Kalgoorlie. As part of the family-owned Hampton Transport business, it specialises in working small open-cut gold mines on Western Australia’s Goldfields.

Hampton’s operation at the Fortnum gold mine north of Meekatharra involves mining ore, loading it onto trucks and transporting to a mill about two kilometres away for processing. The company’s fleet at the site includes a number of Cat off-highway trucks and various brands of non-Cat 120-tonne diggers.

When the Cat 6015B arrived on the market, Hampton Mining and Civil became the first Australian company to buy one, and the digger was put to work alongside the non-Cat diggers loading off-highway trucks.

WesTrac and Hampton cooperated to analyse the performance of the Cat 6015B and Hitachi EX1200 diggers through productivity and fuel-burn studies in January 2018.

The productivity study was conducted on January 23 and 24 and involved using production-test and cycle-time software to measure instantaneous production rates of the 6015B and EX1200.

WesTrac Product Manager for Drills and Mining Shovels Greg Wear says the performance of the excavators was analysed over 20-30 truck loads, with extreme care taken to ensure a level playing field. “We made a point of having the shovels set up on the same ground, with the same operator, loading the same fleet of trucks so we could minimise variation,” he says. “The goal was to have a true, fair and even test.”

To ensure each excavator was given a fair chance, the study also eliminated excess waiting time. For delays of more than 42 seconds between loads, the clock was stopped. “If one machine had lots of interruptions and the other one didn’t it wouldn’t be a fair test, so we made it consistent,” says Greg.

The fuel burn test, meanwhile, was conducted over 22 days between January 1 and January 23. Hampton’s site administrator collated records showing litres burnt and BCMs moved by both the Cat 6015B and the Hitachi EX1200. These were then analysed to compare litres per hour, BCM per hour, tonnes per litre and so on. During the study period, the Hitachi tended to undertake less loading and more tramming work, which would arguably lower its fuel consumption rate.

Analysis of the results showed the Cat 6015B was clearly more fuel efficient and productive. The 6015B took just 6.8 cycles to load a truck compared to the Hitachi’s 8.8, and it took just 2.29 minutes to load each truck compared to 3.16 minutes for the Hitachi. When excess waiting time was factored out for both shovels, the Cat loaded 1704 tonnes per hour – an impressive 28 percent more than the Hitachi’s 1323 tonnes per hour.

The fuel results were equally impressive. Despite having a 27-litre engine compared to the Hitachi’s 23 litres, the Cat burned nine percent less fuel over the study period. When the BCM rate per hour was analysed, the Cat had loaded 97 percent more BCMs per litre, (although the Hitachi had done more tramming).

Greg Wear says the 6015B’s superior levels of productivity will make it a valuable addition to the fleets of many mining contractors.

“If you are loading a truck with seven passes whereas another machine might take eight or nine passes to do the same thing, it means you are moving more dirt in less time,” he says. “The shovel operator spends less time loading the truck, the truck driver spends less time waiting and productivity is increased.”

Greg says the nine percent superior fuel efficiency is also likely to have a major impact on operators’ bottom lines in the long term. “When you look at the total cost of owning and operating a machine, fuel cost is one of the most significant factors,” he says. “People often look closely at the purchase price, but a variation there is pretty insignificant over the 30,000-hour typical lifespan of a machine. But if you look at a nine percent difference in fuel efficiency over 30,000 hours, that really adds up.”

So, what’s the key take-away? “With the Cat 6015B you can move more tonnes while burning less fuel,” says Greg. “That’s what we showed and that’s what we think most contractors are looking for.”