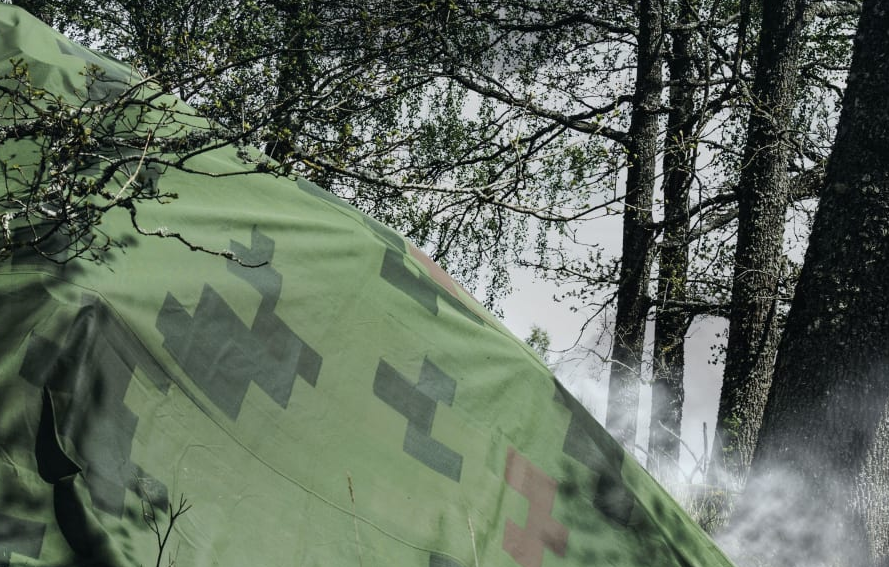 With sensor threats constantly evolving, it’s becoming increasingly difficult for armed forces to act without being observed. Saab is responding by developing camouflage with sophisticated – and surprising – features.

Being well-camouflaged is one of the greatest advantages that armed forces can have in a conflict. While advanced weapons, sophisticated sensors, and well-trained troops are all major assets, the tactical gain provided by being able to act undetected by one’s enemy cannot be overstated.
“Effective camouflage provides you with the ability to act first,” explains Lisa Nigran, Director of Marketing for Saab’s camouflage arm. “It allows you to stay static when you need to and to get closer to the enemy when the time comes. If you don’t have the right camouflage, you risk being detected, identified and hit.”

Unfortunately for those who want to remain concealed, sensor technology is constantly evolving, meaning that camouflage technology must also constantly evolve. In the middle of the twentieth century, camouflage’s main task was to disguise assets from visual and infrared detection, but the arrival of new sensors quickly forced manufacturers to innovate.
“The first camouflage nets that were produced offered visual and near-infrared protection, and this was followed by UV protection in winter environments,” says Nigran. “Thermal protection came next, and then radar, and then true multi-spectral nets.”
Today, camouflage developers face new sensor threats in the form of the high-tech hyperspectral sensors that are currently under development and also relatively low-tech UAVs, which can be deployed in great numbers at low cost. There’s a need for high levels of creativity, innovation, and sophisticated engineering to ensure that camouflage systems retain their ability to provide the power of concealment.

Lisa Nigran explains Saab has been an industry innovator since it burst onto the camouflage market in 1957 with a lightweight, easy-to-handle PVC camouflage net adapted from fishing equipment. The idea was completely revolutionary at a time when almost all camouflage netting was made of natural jute fibre, which tended to be heavy and tended to absorb water.
Today, the company provides the world’s armed forces with camouflage solutions for almost every conceivable combat configuration – for use in static situations, for use on vehicles as diverse as tanks and transports, and for use by individuals working in climates ranging from arctic tundra to tropical jungles. The most sophisticated systems provide protection from signal detection for electromagnetic signals, ranging from ultraviolet to radar, and give armed forces a cost-effective way of maintaining combat supremacy.
“Personnel are now better educated and more valuable than ever before and assets such as radar and tanks are getting more expensive,” says Nigran. “Protection with camouflage is really cheap compared to suffering a loss.”

The static net range includes both 2D and 3D nets suitable for armed forces’ use in environments as diverse as snow, woodland, desert and jungle. Nigran explains that while the two-dimensional nets are highly effective in flat settings such as arid deserts and snow-covered terrain, the three-dimensional nets offer major advantages in settings that are more complex and textured. “Both types of camouflage are multispectral and have different properties and features,” explains Nigran. “While the 2D net is just one layer of material with an added pattern, the 3D net has two layers with a base material providing strength and the second layer creating a leaf-like fringe. This provides far superior coverage in woodland environments.”

The most advanced static nets in the range provide protection from detection across the full electromagnetic spectrum. “That’s everything from UV and then the visual spectrum through to infrared, short, medium and long-range thermal imaging, and radar from zero to one hundred gigahertz,” says Nigran. “And it’s all sold as one net, so you don’t need a separate thermal sheet.”
Nigran says the features of the Saab range provide users with advantages that follow the principle of the ‘protection onion’. “You shouldn’t be there,” she says. “But if you have to go there, be sure that you’re not detected. And if you are detected, be sure not to be identified. And if you are identified, be sure not to be locked on.”
The static nets come in a range of standard sizes that allow them to easily deployed to protect assets from tanks, to artillery, to light armoured vehicles and command centres. They can also be tailored to meet specific needs. “I think the biggest we have done is 18 x 25 metres and that’s a really big net,” says Nigran. With a bank of thousands of camouflage patterns and colours, there are very few limits on the types of camouflage that customers can specify.

“We are the world leader when it comes to imitating the colours of nature in the near-infrared part of the spectrum,” Nigran explains. “This is crucial, as it provides you with the ability to blend into the background when you’re out in a natural environment. You don’t stand out to observers, but you don’t appear as a black hole, either. And we’re also world leaders when it comes to all types of radar.”

While the Barracuda range is today world-leading and used by armed forces across the planet, sensing technology is constantly evolving and camouflage technology needs to keep pace. To achieve this, Saab has a team of 11 engineers at its research and development centre at Gamleby in Sweden, as well as an additional team of three in the United States.
“One big new threat that they are working on addressing is hyperspectral sensors,” says Nigran. “These are capable of dividing up the electromagnetic spectrum to actually detect what an object is made of, and so they’re very difficult to evade. They require a lot of computer power and so we haven’t yet seen them in use in the field, but eventually they will be in use.” To help counter the threat, the Saab team is conducting trials with its own hyperspectral sensor, establishing techniques for deceiving even this most sophisticated of detection techniques.
The team is also monitoring UAV development to combat what may be an even bigger challenge to conventional camouflage techniques. “UAVs just use conventional sensors, but they can get very, very close and they are more or less disposable. So, the static nets need to become even more efficient at masking thermal signals but also infrared and visual signatures. The team is using a UAV for flights over our static nets to see how we can improve them.”
One technique under review for use in the camouflage is nanotechnology, involving engineering products at the nano scale of between 1 and 100 nanometres or one-billionth of a metre. The technology has the potential to bring major advances to the properties of the coatings and pigments used in static nets. “We have done some experiments and trials and we’re working together on this with other institutes, but we’re not at the production stage just yet,” Nigran says.