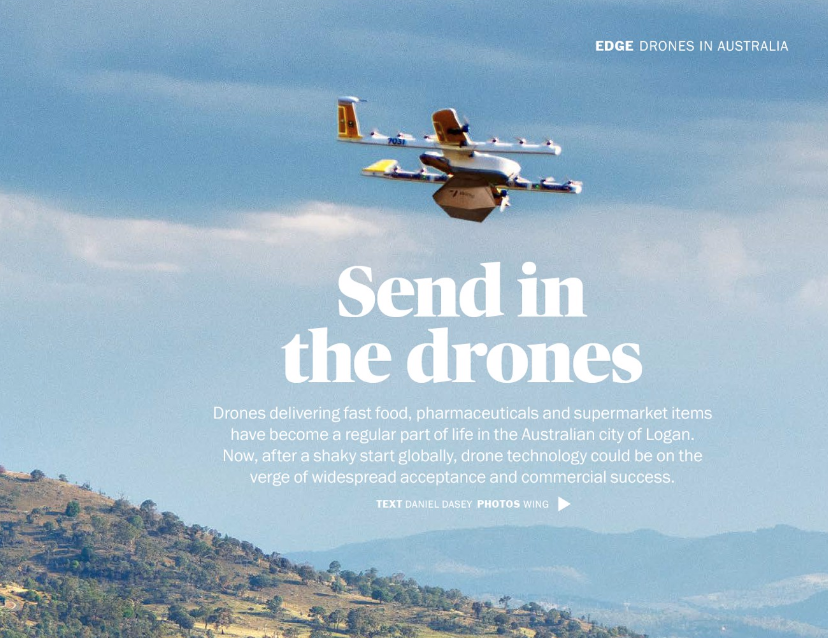 Send in the drones

Drones delivering fast food, pharmaceuticals and supermarket items have become a regular part of life in the Australian city of Logan. Now, after a shaky start globally, drone technology could be on the verge of widespread acceptance and commercial success.

In his grocery story in the eastern Australian city of Logan, Maz Rizk has just received a home-delivery order for one of his tasty roast chickens.

In other parts of the world, Maz might hand the requested dish over to an Uber Eats or DoorDash courier so they could take it by car or motorcycle to the customer. But things in Logan operate a little differently.

Maz’s grocery store has partnered with drone delivery company Wing and fulfils multiple hot chicken orders from their site every day. The chicken is packaged in a customised cardboard box and walked outside to a ‘launch zone’ for pick up by a drone hovering overhead. A staff member secures the box to a clasp at the end of line dropped by the drone and watches as it is hauled up and secured against the underside before the unmanned aircraft efficiently buzzes away.

“Customers love the drone delivery service,” says Maz, whose business, Friendly Grocer Crestmead, also frequently sends milk, eggs, breads and confectionary via Wing. “The drone can carry a load of up to 1.5 kilograms. It doesn’t replace a full grocery shop, but it means our customers can save a trip to the store when they’re short on time or if they’ve forgotten a few items.”

Consumers anticipating the widespread roll-out of delivery drones have been on a rollercoaster ride since the concept first came to mainstream attention in 2013. It was then that digital retailer Amazon floated plans for the use of delivery drones for fulfilling customer orders, via a service ultimately known as Prime Air. With such a large company advocating for the idea, many imagined we were on the immediate cusp of an era when drones would become commonplace in our cities, carrying every type of consumer item.

But the reality has been somewhat different. Nine years on, Amazon is yet to bring Prime Air to successful commercial fruition, despite countless hours of testing, promoting and lobbying for regulatory approvals. Other drone delivery services have burst onto the scene with great fanfare, only to fade away not long afterwards.

However, the positive experience of Wing in Logan has many drone delivery enthusiasts excited.

Dr Catherine Ball, a futurologist and associate professor at the Australian National University (ANU) points to the ‘Gartner hype cycle’ model to explain progress with drone to date. Developed by American research firm Gartner, the model aims to chart the path taken by innovative new technologies as they progress from development to being widely adopted. Initially expectations tend to soar as people consider the potential benefits of a new technology. Then comes a ‘trough of disillusionment’ as it takes longer than expected for the desired results to be achieved. This is followed by a ‘slope of enlightenment’ as businesses learn from their mistakes, and finally comes the ‘plateau of productivity’ as business successfully commercialise the technology and make money from it.

“I would say that drones are on the slope of enlightenment right now,” says Dr Ball, who is also co-founder of the World of Drones and Robotics Congress. “There was a buzz around drones in 2015/16. Then, in 2017/18, they kind of started getting less sexy. More recently during the pandemic, they have come into their own in a number of places.”

Wing, which is owned by Google’s parent company Alphabet, has been trialling its drone delivery services in Finland, the United States and Australia since 2019. In addition to the operation in Logan, Wing provides drone delivery in parts of Canberra, the southern Australian city that is the location for the country’s Federal Parliament.

Ordering via the service is in many ways similar to ordering via a regular terrestrial delivery service. Users scroll through an app to choose from various offerings of coffee, fast food, groceries, confectionary and pharmacy items, such as toothpaste. However, there are differences, too. To accept a delivery, the user must have a suitable open space nearby, free from powerlines and overhead trees. Deliveries are also restricted to a limited geographic area during this trial phase. To date, Wing in Logan has successfully delivered tens of thousands of coffees, as well as thousands of loaves of bread and roast chickens. The company made over 140,000 deliveries to customers across its three countries of operation in 2021 – an increase of more than 600% from 2020.

Catherine Ball believes part of the success of Wing in Logan comes down to state authorities creating specific, standalone policies to permit and regulate the commercial use of drones. In most parts of the world, this has not been done. It might also help that Logan is relatively suburban, with many parks and open spaces.

Dr Ball says there are challenges standing in the way of the further roll-out of commercial drone operations globally. However, solutions are being found. “Singapore and Toronto are both looking at remote traffic management systems in place, with transponders and markers on drones. This would make it possible to see where drones are in four dimensions. And this would allow for designated corridors where drones can fly and be tracked.”

Similarly, noise concerns, a common theme when drones are discussed, are being addressed. New generation drones are far quieter than their predecessors and Dr Ball points out other delivery methods also involve some noise. “People get pizzas delivered on two-stroke motorcycles, which are actually quite loud.”

So, what does the future hold? Dr Ball anticipates far greater commercialisation of drone operations globally over the coming decade. In addition to drone deliveries, we can expect increased use of drones by emergency services. Drones might be used to ferry supplies to snake bite victims or reach people stranded by floods. Government departments may use them to share documents, and B2B supply services for things like urgent spare parts are also likely to be popular.

“The whole area has matured so much in the last 10 years,” says Dr Ball. “And I think the next 10 years are going to see the realization of a lot of business models that people hoped were going to happen five years ago but haven’t got there quite yet.”

Delivery of acute medical care equipment, such as defibrillators

Delivery of pharmaceuticals to remote areas

Each unit weighs 4.8 kilograms and is capable of carrying payloads up to 1.5 kg. Each drone can travel about 20 kilometres before recharging, and multiple batteries and navigation systems are in place for the sake of redundancy.