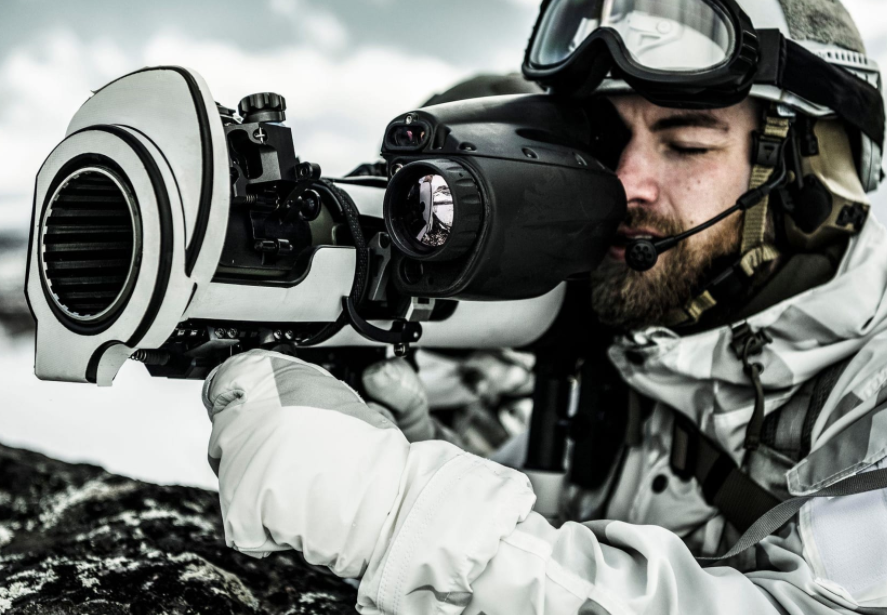 Sights on the future

By collaborating with independent sight manufacturers, Saab is supporting users of its 84-millimetre recoilless weapon range to enhance capability.

Saab’s Carl-Gustaf recoilless rifle is among the most popular weapons with armed forces around the world. Light-weight and durable, it combines ease of use with devastating fire power.

But even great weapons can be improved upon.

While we normally supply the Carl-Gustaf M4 with a choice of either integrated metal sights (iron sights) or a red-dot sight, some users require even higher levels of control, accuracy and flexibility. To enable this, Saab collaborates with a limited number of leading manufacturers who produce extremely sophisticated sights (also known as advanced fire control systems) that are capable of enhancing accuracy, engaging moving targets and reducing fire time.

“In the hands of a trained gunner, the standard Carl-Gustaf M4 system can provide a major tactical blow to the enemy,” says Jimmy Bertilsson, Product Manager for Sights at Saab’s Business Unit Ground Combat. “But factors such as intense battle conditions, poor light, moving targets and a surprise encounter with enemy forces can all put extra pressure on the operator. This is where an advanced fire control system can be a real game changer.”

A great example of this is the new electro-optical advanced fire control system which is currently under development and due for release in 2022. Created through close cooperation between Saab and Finnish optronic producer Senop, the new sight features a thermal imaging system and advanced ballistic computer. The result is improved accuracy 24/7, no matter what the lighting conditions. The system is also designed for use with both conventional rounds and programmable rounds.

“The cooperation between Saab and Senop has been excellent, and this shows in the finished sight,” says Bertilsson. “Because Senop is from the Nordic region, they really understand the challenging climate involved in Arctic warfare and the kinds of situations a gunner can face.”

While the sight is designed for use with the Carl-Gustaf M4, it will also be compatible with the other member of our 84mm recoilless family, the disposable AT4.

So, exactly what benefits can advanced fire control systems of this kind deliver? And what parts of armed forces might consider using them?

A good starting point is to consider the process for targeting and firing the Carl-Gustaf M4 using conventional sights.

The different types of Carl-Gustaf rounds (such as anti-armour or anti-personnel) have different weights and ballistic properties. To enable simple targeting and firing, interchangeable range knobs are used to give each round exactly the right exit trajectory when fired. So, the first step is to have the right range knob in place for the round in your weapon.

When the enemy is spotted, the gunner and assistant gunner determine the range either using a laser range finder or by making an estimate. The range knob is adjusted accordingly, setting up the trajectory. The gunner then takes aim using the sight, and fires.

While this whole process normally only takes a matter of seconds, each moment is critical in a battlefield situation.

With an advanced sight fitted, the process is far simpler.

When a round is loaded, the gunner simply enters the round type into the sight interface. To fire, he or she uses the laser range finder to determine the target distance. The ballistic computer processes the target distance, type of round and propellant temperature to set up the point of aim for the operator. The operator places the red dot aiming point on the target and is ready to engage.

For moving targets, the operator simply tracks the target for 2-3 seconds, after which the ballistic computer determines a forward aiming point by processing the target angular velocity distance combined with type of round and propellant temperature. Based on this, the red dot is automatically adjusted for an optimal trajectory and the operator is reday to engage.

By eliminating the need for changing range knobs, entering the range, and calculating the likely location of a moving target, the system saves valuable seconds, all while significantly increasing accuracy.

The FCS13-RE system will bring even greater benefits when combined with the new programmable round.

With such rounds there will be no need to even input the round type, cutting out another step in the process.

“Shaving off milliseconds when it comes to attacking the enemy can be the difference between life and death,” says Bertilsson. “And you do not want to miss that first shot and reveal your position. An advanced sight helps you get that first-round hit, every time.”

Use with airburst rounds

Another key benefit of an advanced fire control system is its use with airburst rounds. With a conventional sight, the gunner must adjust the range knob to ensure the round explodes in the correct position over the target. The assistant gunner must also set the correct distance on the round itself. However, the ballistic computer in an advanced sight calculates the optimal burst location and timing. The gunner simply chooses the airburst mode on the sight before firing.

While Aimpoint produces the world’s premier red dot system, we also wanted to provide customers with an thermal sight suitable for extreme low-light conditions, 24-hour use, and harsh climates. This is especially crucial given how important night combat has become to modern warfare.

To this end, we have started to integrate the SENOP AFCD to the Carl-Gustaf M4.

Weighing well under two kilograms, the Senop sight will deliver computing and range finding capabilities similar to the Aimpoint sight along with the benefits of thermal imaging technology.

Use by special forces

Bertilsson says, like the Aimpoint sight, the Senop sight will radically change the experience of the gunner. “Previously there was always pressure on the gunner to keep the different variables in his head,” he says. “When you’re in combat and there are bullets flying everywhere it becomes a challenge to do all these things. But with advanced sights, you’re supported and you can respond faster.

So, what parts of armed forces are likely to use advanced sights?

Bertilsson says one large customer has fitted the Aimpoint site on its entire stock of Carl-Gustaf M4s. “However, in most cases, sights like these are being used by special forces,” he says. “Having superiority over the enemy in terms of fire power and sensor quality is crucial for their mission success. They demand extra functionality so that they can operate without back-up and support.”

Looking to the future

While the Aimpoint and Senop sights provide users with major tactical advantages, Bertilsson says even more advanced features are already being considered. For example, future sights may use smart algorithms to detect movement, actually helping the gunner to identify the target in a chaotic battlefield environment prior to firing.

“There is an enormous number of possibilities, and we will be exploring many of them to ensure that our customers get the best possible value from their 84mm systems,” he says.