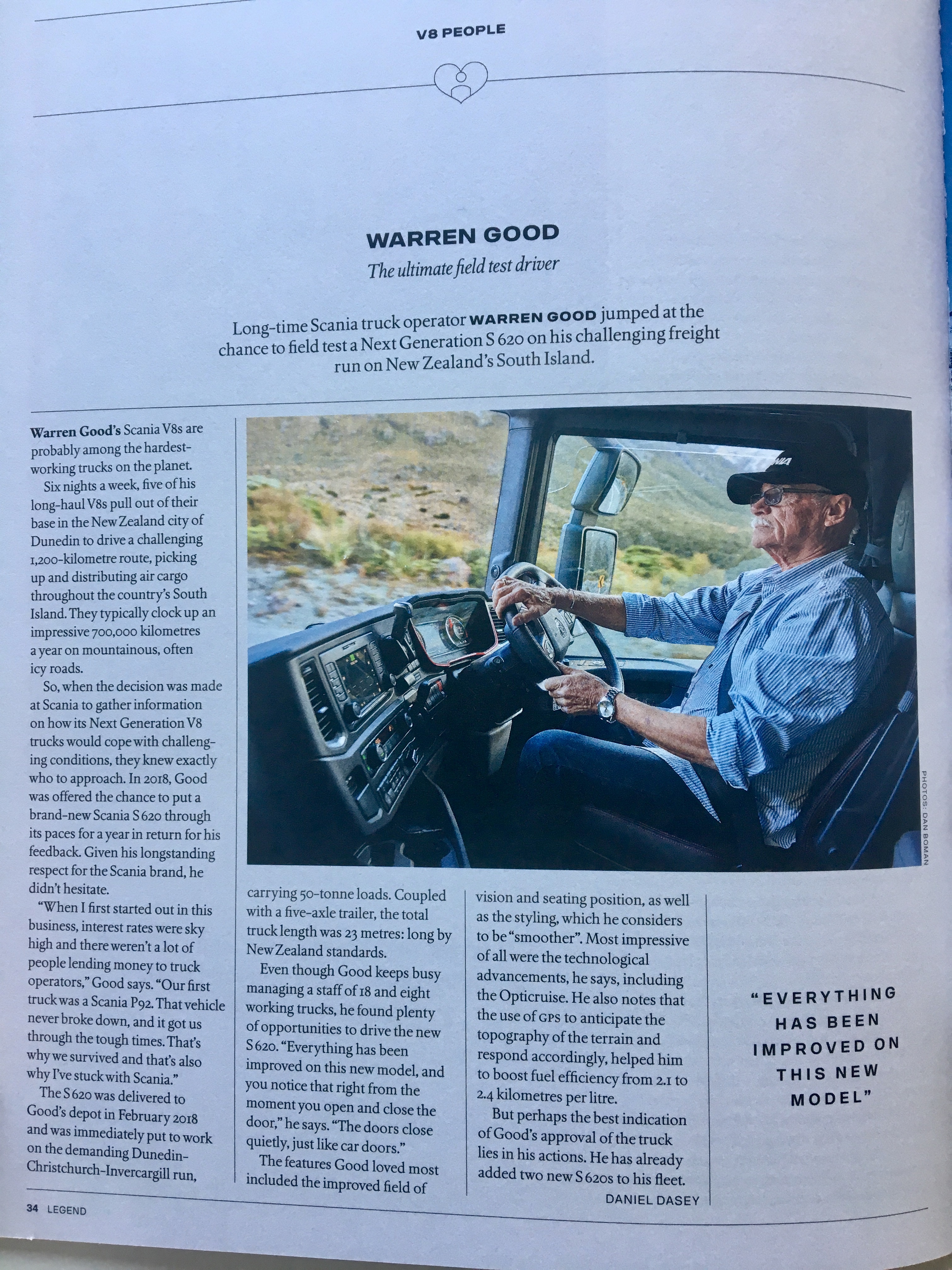 Long-time Scania operator Warren Good jumped at the chance to field test a Next Generation S620 on his challenging freight run on New Zealand’s South Island.

Warren Good’s Scania V8s are probably among the hardest working trucks on the planet.

Six nights a week, five of his long-haul V8s pull out of their base in the New Zealand city of Dunedin to drive a challenging 1200-kilometre route, picking up and distributing air cargo across the country’s South Island. In a typical year, they clock up an impressive 700,000 kilometres on mountainous, often icy, roads.

So, when Scania wanted to gather information on how its Next Generation V8 trucks would cope with local conditions, they knew just the man to approach. In 2018, Warren was offered the chance to put a brand-new Scania S620 through its paces over a year and provide feedback. Given his longstanding respect for the Scania brand, he didn’t hesitate.

“When I first started out in this business, interest rates were sky high and there weren’t a lot of people lending money to truck operators,” Warren explains. “Our first truck was a Scania P92. That truck never broke down and it got us through the tough times. That’s why we survived and that’s why I have stuck with Scania.”

The S620 arrived for service in February 2018 and was immediately put to work on the demanding Dunedin-Christchurch-Invercargill run, carrying 50-tonne loads. Coupled with a five-axle trailer, the total truck length was 23 metres – long by New Zealand standards.

While Warren manages a staff of 18 and a total of eight working trucks, he had plenty of chances to drive the S620.  “Everything has been improved, right from the moment you open and close the door,” he says. “With the new model, the doors close quietly, just like car doors.”

Warren says he loved features including the improved field of vision, a better seating position and smoother styling. Most impressive of all were the technological advances, including Opticruise. Using GPS to anticipate the topography the truck is on and respond accordingly helped boast fuel efficiency from 2.1 to 2.4 kilometres per litre.

But perhaps the best indication of Warren’s approval is in his actions. He has already added two new 620s to his fleet.