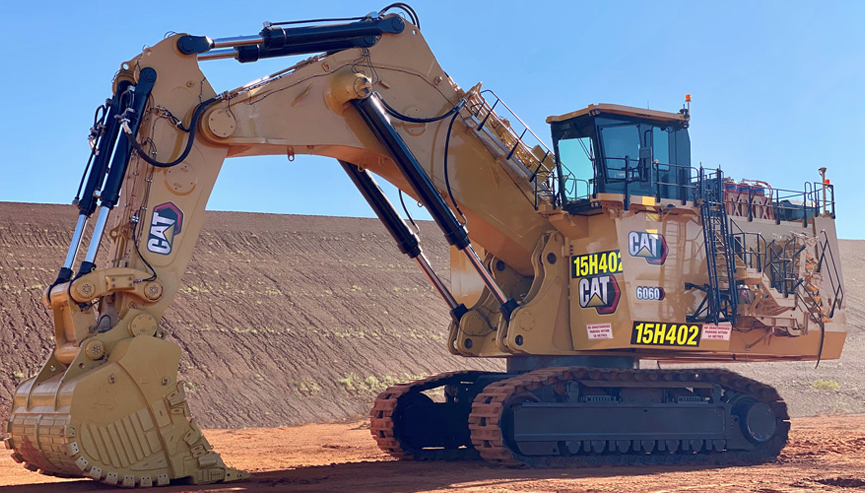 The company has ordered six Cat 6060’s from WesTrac for use at its Marandoo and Koodaideri iron ore mines in Western Australia’s Pilbara region. Equipped with Cat MineStar™ Terrain technology to optimise loading efficiency, the Cat shovels will help Rio Tinto deliver both productivity and safety gains.

Close cooperation between Rio Tinto and WesTrac ensured the commissioning of the hydraulic shovel at Marandoo was achieved on schedule, despite a number of challenges.

Rio Tinto Manager Marandoo Operations Maurice Schneider said that the introduction of this piece of equipment will complement existing Cat machinery at Marandoo.

“We already have autonomous trucks at our Marandoo site, so introducing the Cat 6060 shovel was a natural choice, as it means both the shovels and trucks are manufactured by the same OEM and operate under the same management system.”

WesTrac Executive General Manager of Sales, Geoff Bailey welcomed the delivery and said the team is looking forward to fulfilling the rest of the order.

“Rio Tinto is widely recognised as an industry leader in adopting advanced mining technologies,” he said. “WesTrac has a long working relationship with Rio and we’re excited to see the difference that these Cat 6060 shovels will make to its operations in the Pilbara.”

With a 61-tonne payload, the Cat 6060 is matched to load the Cat 793F truck in four passes. The Next Generation Cat 6060 is also notable for being a 100-percent Cat machine and delivering extremely high levels of reliability and durability.

The first of the shovels was delivered in May and has now gone into use at Marandoo where it will be joined on site in August by a second shovel. The remaining four will be delivered for use at Koodaideri from 2021.

The delivery of the Cat 6060 was not without its challenges, given the restrictions on travel and working conditions as a result of the coronavirus pandemic.

Geoff Bailey adds, “The successful coordination between both teams at WesTrac and Rio Tinto throughout the COVID -19 restrictions, including the change of rosters while avoiding any disruption to the build or delivery, is testament to the commitment of those involved to ensure the 6060 was on site when it needed to be.”

Mr Schneider said, “One of the key features of the Cat 6060 that made it attractive to us, is its Cat MineStar Terrain technology.”

Cat Terrain technology refers to an exclusive feature which provides operators with real-time data in the cab on variables from bucket positioning and bench height, to ore bodies and volume of material cut and filled. This enables the operator to maximise machine efficiency, leading to better material management, more accurate grades and less rework and wear.